W1RBO (formerly KC1BGR) at Rockbottom Observatory is on the air!

When I was a kid, I wanted to become a ham radio operator. Unfortunately, try as I may, I could not master Morse code. In those days and as recent as 2009, proficiency in Morse code was a prerequisite. Disheartened, I long ago removed ham radio from my bucket list. However, in 2010, the FCC in their infinite wisdom removed the requirement.

I am now a member of the amateur radio community. I currently hold a general class license. I can be found most of the time either on the 40 meter band around 7.192 mhz, or on the local 2m Westford or Marlborough repeaters.  My “ham shack” is still a work in progress, but it is slowly shaping up. My primary antennas are a hy-gain 14avq 40-10 meter multiband vertical and a dual band 2m and 70cm J pole antenna. The shack is setup to run on AC or battery backup. 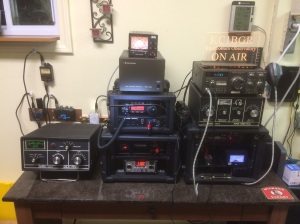 I volunteer when I can, to provide communications support for local public events through the MMRA, PART, and other local clubs. If you hear me on the air give me a shout.